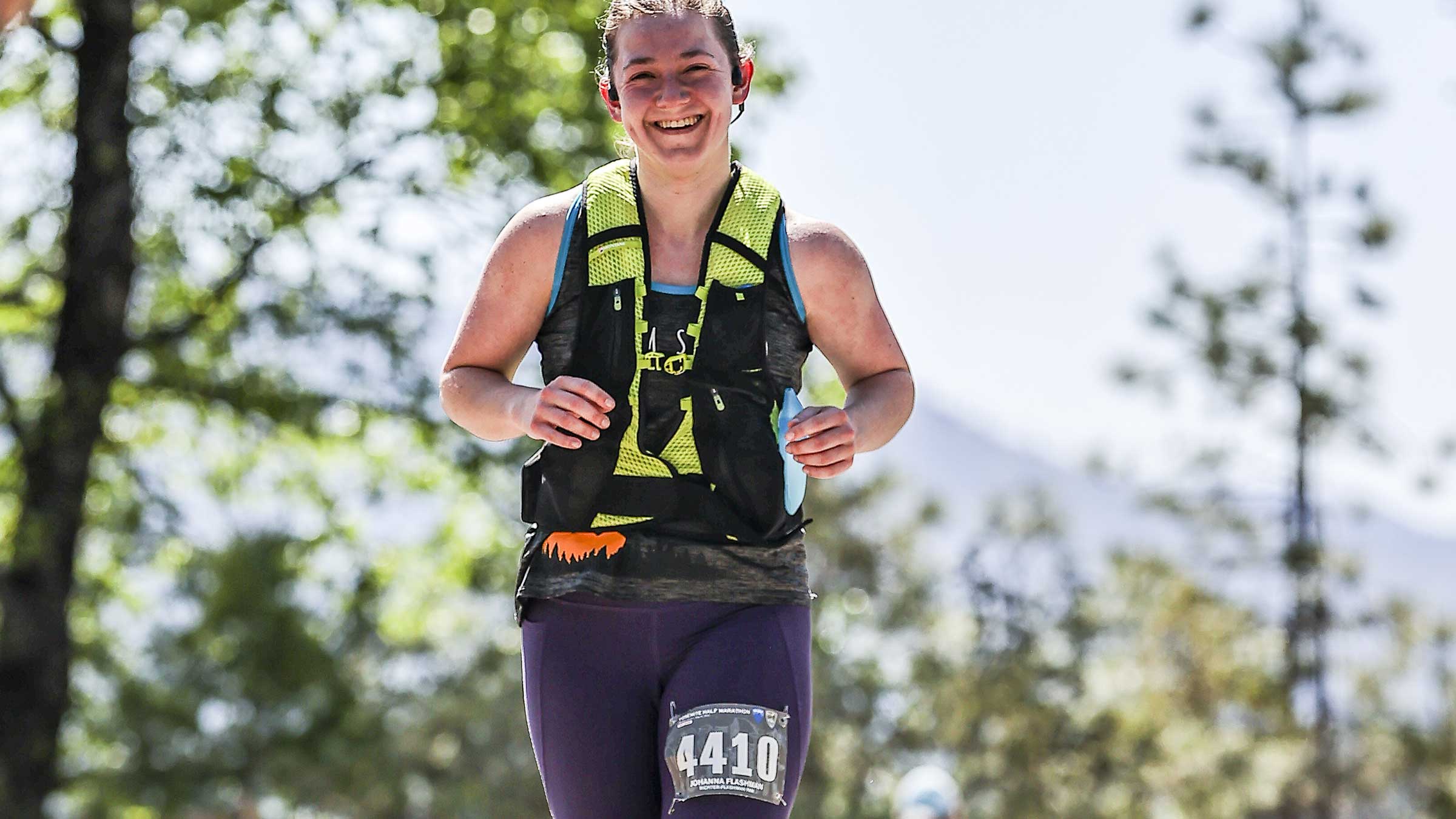 I’m WAY behind on this, but in early May 2021, I finally ran the Yosemite half marathon I’d been planning to run. (Yes, I was training for this back in May 2020.) First, let me just say it was beautiful!

And I discovered how chaffing works between your arms and sides. (It hurts, that’s how it works.)

And all in all, it was a great time.

Quick disclosure: this half marathon is outside Yosemite National park. It’s not actually inside the park. No Half Dome views. No running past Yosemite Falls. But it was very pretty and is relatively close to Yosemite.

So, what was it really like to run my very first half marathon race?

It was a lot of fun. I think I got a runner’s high… Either way, there were definitely times I was running where I was grinning so hard and just having a blast enjoying the scenery, drinking incredibly sugary fluids, and stocking up on some Honey Stinger gel snacks at almost every rest station.

But there were other times that I wasn’t all smiles and joy. Mostly, the very start and the very end. Like, first two miles and last mile and a half. Those were rough. Here’s why.

The first two “Can I Do This?” miles

During the first two miles, I was just warming up. It was maybe 8 am, there wasn’t any coffee like I’d expected, I’d just sat on a bus for 45 minutes, and I didn’t really know what one does at the start of a half marathon.

The start line was open because they just had a chip on your bib number that started your timer when you crossed the start line. I filled up my water bottles, went to the bathroom, did some stretches, and then was just like… “guess I’ll start now?”

I started slowly, warming up because that’s what the Nike Run Club coach always says to do and it makes sense, but going slow got me antsy. It was still an effort and that made me nervous. I was thinking “damn if this is effort, how the heck am I going to do the whole thing?!”

The first mile marker felt like ages and the second one also felt long. I was doing between a 10 and 11-minute mile and felt sluggish. It didn’t feel good that I was just willing the next mile marker to show up around the next corner. Then I’d look at my phone’s mileage tracker and be at 1.44 miles.

But then I passed mile marker 3 and suddenly I was 6 miles in, then over halfway done, and feeling good. My stride was stronger, I was relaxed, and smiling. The volunteers at the fuel and water stations cheered us on and I was passing quite a few people (probably because I’d signed up for a much slower time category since I wasn’t sure how I’d do when I signed up).

Pushing through the end struggle

These good vibes generally stayed strong through the run until maybe mile 10 or 11. Then it started to feel hard again. My feet hurt. I had been sweating so much I was dusting dried sweat salts off my forehead and side of my face (gross, I know you didn’t need to know that, sorry).

Then I noticed the chaffing. The inner parts of my upper arms were red and raw from the amount of time swishing back and forth against my tank top. I was cursing myself for not thinking about vaseline before starting the run  — I’d never gotten it on my arms like that though, so hadn’t even thought about it!

At this point, we were running on the closed-off road around Bass Lake with houses lining the road. Some people were hanging out in their front yards with music, noisemakers, or signs cheering runners on. I have to say, that felt cool. I knew I was almost done and almost there and yes, I do got this! But it was still nice to be told since my legs were very tired.

Finishing My First Half Marathon

At the finish line, I was so ready to go sit down and drink my chocolate milk.

But also, it felt a little anticlimactic. Like Christmas morning at 17 years old where you still kind of expect something magical to happen, but also, it doesn’t really.

I got my box of snacks (that I demolished and was still hungry after). I got my finisher medal. And I met up with my mom who had been cheering me on and had done the race with me (she started earlier than I did and finished with a time of 3 hours 54 minutes — I’m VERY proud of her!!!).

It was a great feeling. But also, was I really any different? Not really. Did I still feel accomplished? Definitely. Was it incredibly challenging to stand up after sitting down to eat my snacks? Yes, yes it was.

Some Finer Detailed Notes on Doing My First Yosemite Half Marathon

In case you’re thinking of doing a half marathon any time soon (you 500% should! — if you want to), these are my finer notes on the experience with how I trained, fueled, and what I’d do differently in the future.

Since my race got postponed several times due to Covid, my training was a little weird. I’d start to get serious, then ease up, then stop a little. Then get back into it…maybe..but not actually. And then ACTUALLY did some training.

So my structured training started around 9 weeks before the race. I used the Nike Run Club app (suggested by my sister) and played around with their 14 weeks to half marathon training plan to make it work for me.

Basically, I ran 5-days a week — some very easy and short 15-20 minute runs, some longer 30-45 minute ones, and one longer distance-based run per week. The long run got longer and longer each week up to around 12.5 miles two weeks before the race.

On my longer training runs after around 7-8 miles, I started bringing snacks and water on the runs with me. I always used my running vest from Montane and used the soft water bottles that came with the vest, but I experimented a little with snacks.

Here are a few of the different snacks/fuel I tried and how well they worked.

What I’d Do Differently

In general, I feel happy about the way things turned out with my run, but there are things I could definitely improve on.