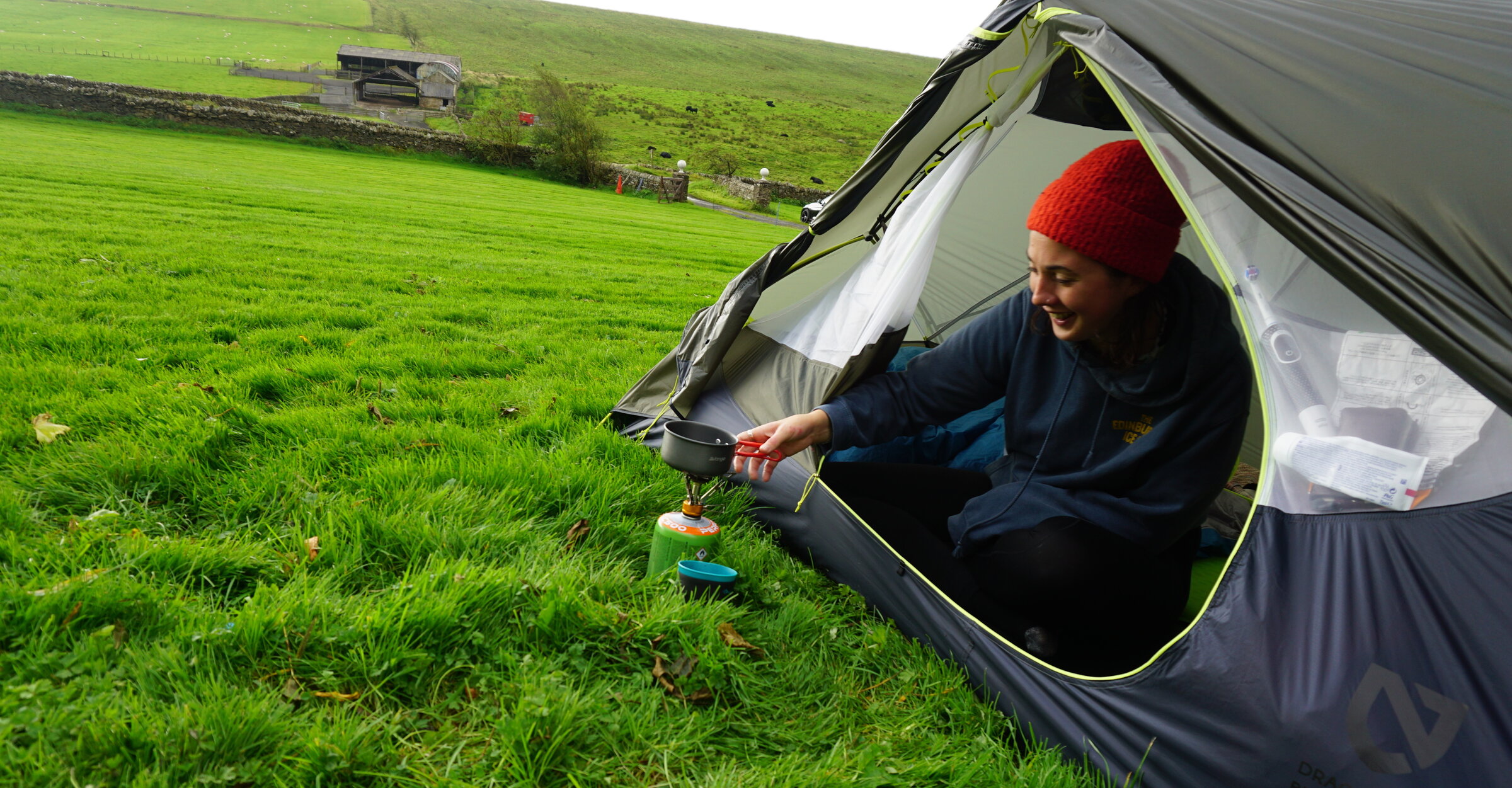 Back in September, I went on a weekend camping trip in Northumberland National Park and it was beautiful. Not only that, I was tent testing, so it was all in the name of work.

To be honest, I knew very little about this area before going on this trip. I knew Google Maps had a big green splotch that was “Northumberland National Park” and it was vaguely close to Newcastle Upon Tyne (Newcastle). I also knew Cam, my partner, was going to the area on a trip with some friends so I could get a ride to have my own adventure. Let the (COVID-safe) planning begin!

First line of business: find someone to come with me. I could go solo, but the convenient thing about Northumberland is it’s right in between the North York Moors and Edinburgh meaning a friend from there could swing down and join me. Reunion and companionship!

Where to Camp in Northumberland

Second line of business: where to stay. Considering I was testing out this tent (it’s a phenomenal bikepacking tent from NEMO that’s for 2021), I was going to be camping, so that narrowed down the search.

Compared to the US, in England there aren’t park-run campsites and you can’t just go backpacking and do dispersed camping in a national forest area. In Scotland, they have a “right to roam” law where you can pretty much camp anywhere as long as you’re respectful and don’t keep the tent set up during the day. But in England, you have to find a designated, private campsite to pitch your tent. Pitch, please.

So I looked for a private campsite that let me pitch a tent and was close to the park. There are several different campsites in the area, but I chose Winshields Farm Campsite. It’s straight forward, conveniently located, and the owner Malcolm was really friendly and easy to work with – we’re working out some website copywriting now!

A few other places I considered, in case you’re looking were:

What to Do in Northumberland

What specifically got me going about Northumberland were two long-distance walking routes (Hadrian’s Wall Path and Pennine Way), the international dark sky park, and climbing. Both nights we were there it was rainy and cloudy, so I can’t speak to the dark skies but we did see both the Pennine Way and Hadrian’s Wall. I didn’t do any climbing this trip, but I did scout out some of the rock and definitely want to get on it at some point.

Hadrian’s Wall Path follows the UNESCO World Heritage Site, Hadrian’s Wall, which was a coast-to-coast wall that the Roman’s built to guard the northern frontier. There are tower and fort remains and informational museums along the way.

We only walked a very short portion of the path, but the whole thing goes on for 84 miles from Newcastle upon Tyne to Cumbria. People will walk the entire thing over an average six days, but you can also take your time or speed through it. (The Fastest Known Time is 16 hours 25 minutes.)

To be honest, we didn’t really walk much on the Pennine Way, but it goes with the Hadrian’s Wall Path for a bit and we saw the turn-off for it.

According to National Trails, the Pennine Way is the “oldest and most iconic national trail.” It’s 268 miles of walking from the Edale in the Peak District to Kirk Yetholm, just north of the England/Scotland border. The whole thing typically takes between 16 and 19 days, though the fastest known time is two days, 13 hours, and 35 minutes.

Northumberland has low levels of light pollution making it the most “pristine dark skies” in England. In 2013, the area became England’s first International Dark Sky Park and has been trying to conserve it ever since. Since we didn’t get any clear skies while we were there, I can’t speak to this personally, but the stars are supposed to be spectacular. I hope to go back and see them at some point!

We didn’t do any rock climbing on this trip, but that didn’t stop me from dragging my friend with me to scramble along the rocks in front of a climbing area. The rocks look amazing and it has some top class, beginner-friendly trad routes I can’t wait to try in the future!

Check out UK Climbing for more information on some of the crags I’m talking about. Jezebel is the one I’m going for first.

Have you had a good experience in Northumberland? Share it in the comments, I’d love to hear about it!