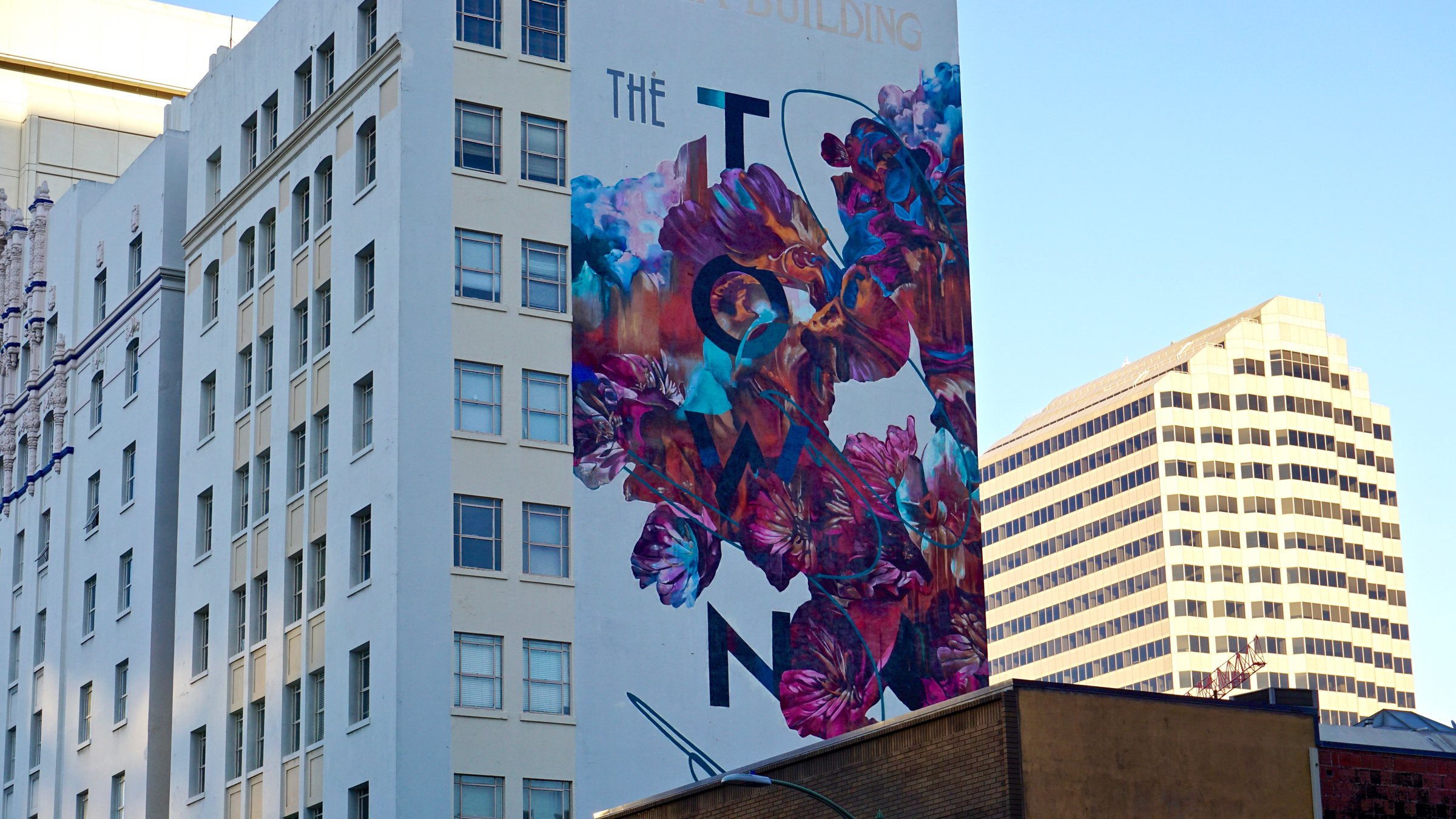 Being the place I grew up, Oakland holds a special place in my heart. However, I’ll admit there’s a lot about it that I don’t know. With this in mind, last weekend I played tourist in my own city and walked around to look at murals. There are more than 1,000 murals in Oakland (another fact I just learned while researching murals), so obviously I did not see them all. Plus, the entire city is just over 77 square miles so walking that much wasn’t going to happen. However, in the mile and a half that I did walk, I found a ton of murals I’d never seen before.

Aside from the beauty of these murals, a lot of them have some special significance and it brings a new appreciation for how much culture and history this city really has. I’ll admit I’m in no way an expert in murals, graffiti art, or Oakland history, but on my little playing-tourist adventure these were some of my favorite pieces of art. I’ve added some information on them from what I could find from a bit of internet research.

If you want to learn more about Oakland’s murals or find others for yourself, Oakland Wiki has an amazing database of many of the murals around The Town. Some of the ones I mention here however, are not in that database.

Painted in 2016 by Dante Orpilla through Dragon School, a nonprofit based in Oakland Chinatown/downtown, and arranged by Fuming Guerilla Productions, a local company that connects clients to artists.

Signed by Bud Snow in 2014 for Babelab. Bud Snow is a muralist and multimedia artist based in Oakland. Plus, she does rad feminist work as well!

You can’t really tell from this picture, but this mural covers an entire side of a building. Those yellow lines at the bottom are parking spots, that’s how big this is. My head would maybe reach the bottom of the boat. THAT’S how big this is and it’s beautiful. The mural was started by Lailan Huen, designed by Thomas Wong, and completed in early 2013. The artist team was Thomas Wong, John Hina (of 808 Urban), Jose Garcia (Peps), and Sylvia La.

My photo really doesn’t do these two murals justice because they are vibrant, colorful, and gorgeous. They are also super new only finished in 2019 by the Dragon School.

This 7-story tall mural was one of my favorites that I saw, and I didn’t even know the name at the time. According to LocalWiki (reliable, I know), artist Keith Sklar, with Brooke Fancher and Dan Fontes painted this in 1985. It used to have more on the bottom, but has since been painted over. It’s not overly obvious, but if you look closely, you’ll notice the Hanukkah dreidel, Matza, and a community of different types of people. The text on the building in the mural says “Create for yourselves a new heart a new spirit.”

Meet Derrick Hayes—the subject of this mural. Troy Lovegates, a local artist, painted this in 2017 with the help of Athen B Gallery. In an Instagram post about the project, Lovegates wrote, “Been spending the holidays in downtown Oakland way up on a lift …. painting a mural of Derrick Hayes an Oakland local who sells newspapers around piedmont Ave in the morning and roams around the city on his bicycle visiting friends in the afternoon …. thanks to @athenbgallery for facilitating this project …” In a later post, he wrote, “Thanks to Derrick Hayes for passing by everyday and not only being the subject matter but a positive hype man keeping me inspired.”

“The Town” mural was painted by Hueman. To be right in front of it, you’d have to go off course a little, but you should be able to see it just fine from the corner of Franklin and 17th street. In an Instagram post, she wrote, “I went all along Oakland’s waterfronts taking photos of the flowers there. To me these flowers on the water represent the line where nature comes into contact with the city. So I created this bouquet for all of the Town to enjoy, in this place that I call home.”

Utility Box on 17th and Broadway

The artist, Gale Madyun, painted this utility box as a part of Earth Island’s “Streets Alive! Utility Box Project” and was sponsored by the Bill Graham Foundation. The Bill Graham quote on this box reads: “Who could have dreamed in 1965 that the alternative society would eventually multiply to such extraordinary proportions that it becomes our mainstream?”

Joshua Mays’ mural, Beacon Frequency Reader, is almost 10 stories high on the North wall of 1700 Broadway, so if you’re walking up from 15th street it’s easy to miss. However, if you’re coming from 19th Street, this painting stands out like, well, a beacon. Mays is a self-taught painter, muralist, and illustrator based in Oakland. With sponsorship from Athen B Gallery, this mural went up in 2017 and got some well-deserved press from SF Weekly in March 2019. According to SF Weekly’s reporting, the staff the subject holds has mystical powers of “frequency reading,” as Mays calls it. Mays tells SF Weekly, “The placement of the mural, and this figure being right there — at the 19th and Broadway BART stop, she’s right there — the story in my head is that she’s opening a portal into a new realm, to new experiences, or for those who engage her.”

I don’t know if this one has a name, but it’s another from Troy Lovegates with Athen B Gallery and was only finished this past July. In an Instagram post, Lovegates wrote, “Painted a mural in downtown Oakland this weekend … a mixture of local faces and whoever else I saw in the paint blobs … met a lot of interesting folks … thanks @abgprojects !”

Utility Box on Telegraph and 20th

I couldn’t find the artist who painted this utility box. Unfortunately, it’s a little worse for wear from graffiti, but I think it’s worth a mention because it’s a really powerful image.

We Are The Ones We’ve Been Waiting For

This mural went up in 2014 by the artist Jessica Sabogal. Check out some of her other stuff too because she does a lot of amazing murals with powerful messages. GoPro created a video documenting the process called “We Are the Ones.”

This mural by Ernest Doty went up in 2015 and is on the outside of the Oakland bar, Lost and Found (which is also a nice place to get a drink and sit outside). Doty used to be based in Oakland, and has since moved down to LA. According to his Instagram, 10% off all his sales go to homeless outreach.